2019 is the year when things changed. ÖTILLÖ was no longer a chase for time but more a battle of the minds and soul for the win.

In the grey morning with raindrops in the sky you could feel and smell the anticipation and the fear of a long day ahead. For the first time we actually had all of the 160 teams on the start line. 320 racers from a total of 25 nations and without a doubt the best line up until date looking at the whole field. It is apparent that the sport of swimrun continues to develop and that the skills are expanding at a continued rate.

For us the preparations and organisation of the event had gone better than ever before. We felt ready.

At the gun everyone set off at the leisurely pace of the master start to the first swim where it is a bit of mayhem before all the teams find their position in the field. It seems as if this is where adrenaline and fear takes on its darkest face. Soon after it seems to settle down.

At the first swim exit Team Swimshop.se was an easy 50 metres in front of the leading pack. An impressive swim knowing who was chasing. The first couple of islands were extremely slippery and we are fortunate that we did not have any major injuries from falls, as most seem to not have switched on the brain yet.

The NOCCO Sprint prize saw a pack of hungry, chasing wolves explode through the energy station followed by full- speed mixed and women’s teams. This was going to be one of those days.

During the morning the skies cleared, the sun came out and the wind picked up; making the rocks dry out and changing the character of the swims into more wave bashing.

The moment of truth came as seeing the lead of the race, 4 men’s teams stopping at the beginning of the Pig Swim arguing about who would go first and who would draft. This happened again in the middle of the swim where the ploughing team stopped and they all stopped and bickered. No more full- speed ahead, it had become a game of tactics and who would outsmart the others. This we have never seen before in this way and we suspect that we will soon see it in the mixed and women’s categories too as the teams get more and more even.

In the future we will see sprint finishes between the top teams and most likely on ”heartbreak hill” on the way up to Utö Värdshus. Wow, how exciting for the outside and wow, how horrible for those in the middle of it!

In the end Pontus Lindberg and George Bjälkemo of Team ATG Sport had the most amount of steam and won two minutes ahead of last years World Champions Fredrik Axegård & Alexander Flores of Team ARK Swimrun who gave it all they had! Such impressive racing from all the top 4 teams and it is crazy to see how crushed they are coming across the line. Congratulations Pontus and George – Your third try took you all the way home! 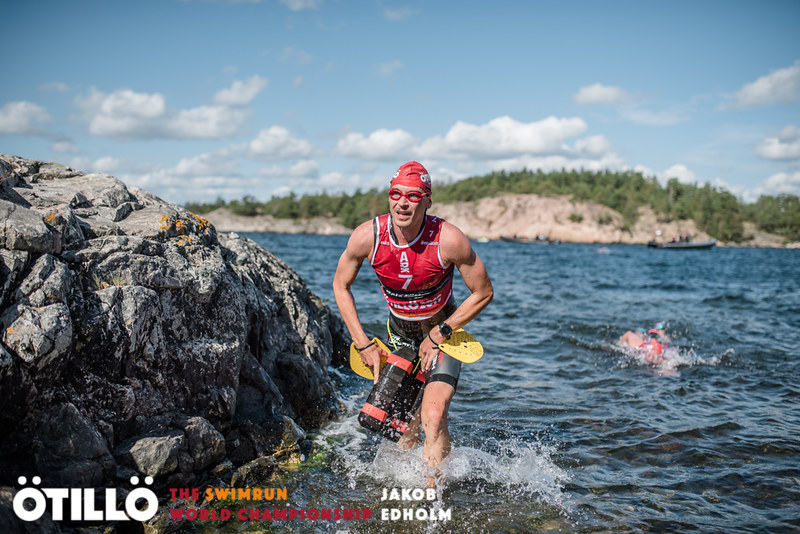 In the Mixed category things changed dramatically during the day. Knut Baadshaug and Diane Sadik of Team ARK Swimrun had a lead during most of the day being chased by Charlotte Eriksson & Simon Börjeson (Team Garmin) and Jasmina Glad- Schreven & Thomas Schreven (Team Say no to doping).

But at one point Team Garmin put in a push for the 5- 6 minutes they had to catch up, at the same time as the steam ran out of Team ARK. In the end Charlotte and Simon of Team Garmin managed to show that they had a perfectly planned and executed race to win the title of World Champions ahead of Jasmina and Thomas of Say no to doping. Knut and Diane fought hard against the demons inside and took the third place. Unfortunately former World Champion Martin Flinta and Johanna Edman had to pull out due to injury along the way.

In the Women’s category we knew from the outset that the race would most likely be decided between the two Team Envol teams; Susie Moonan & Anna Hellström vs Fanny Kuhn & Desirée Andersson, unless something unfortunate would happen during the day.

From the first swim Fanny & Desirée put the hammer down and did not once during the race let go of the lead. They finished 19th overall and are the new World Champions. In second place Susie Moonan & Anna Hellström did a perfect race and managed to keep the chasing ARK Souls team of Helen Vikmar & Isabella Hedberg behind them.

All in all we had a record number of 146 teams across the finish line, all of which finished under 14 hours of racing. This has never happened before.

Now we look forward to a beautiful autumn of races in Germany, France and Malta before we tackle our 15th year of ÖTILLÖ races starting with Catalina, USA in the end of February.

We sincerely hope to see you out there. Congratulations to all of you who started the race, you are all winners in our eyes.

Let’s continue to use swimrun to build bridges between people and cultures.