The 2017 ÖTILLÖ Swimrun World Championship will go down in history as the event where the boat drivers, staff and volunteers pulled out all stops to deliver a safe and smooth event. Along with this, our amazing media teams managed to capture the essence of ÖTILLÖ throughout the day – a symbiosis with Mother Nature!

Imagine spending up to 13 hours in open boats in gale force winds and driving rain or managing energy stations in the same conditions, all with big smiles and loads of enthusiasm. Just to make sure that the racers could make it from one end of the Stockholm Archipelago to the other.

One week ago, 150 teams from 21 nations arrived at the island of Sandhamn. The anticipation and nerves were raw, and everyone felt it. At the race briefing the adrenaline was pumping. We, on our side, were also overflowing with anticipation but also with a bit of anxiety. We all knew where the weather was going. Was everyone going to trust us? We knew we had superstars on every key position in the organisation and if we managed to get up on the first island and if the weather stayed as predicted we were confident everything would work out / everything would be OK.

The general feeling after the race briefing was one of elation; everyone wanted to keep to the original course and we were going for it. But to be on the safe side, plan B was in place, logistics, maps, work orders etc – everything was prepared for a last-minute change.

In the morning, the wind was howling, the rain was teeming and it was all from the right. At 5:40 am, 20 minutes before start, Michael jumped ashore the first island and set the strobe. He and Mats had decided to start if that was possible. The call was made and off the teams went.

What a massive day! Most of the time the wind and waves were coming more or less from the left. This made the swims more like surfs, and with lots of safety boats around. The last islands before Utö offered almost down-river swimming as waves and currents pushed through the narrow gaps between the islands. Probably the hardest swims for the teams, as they had not expected it would be challenging. 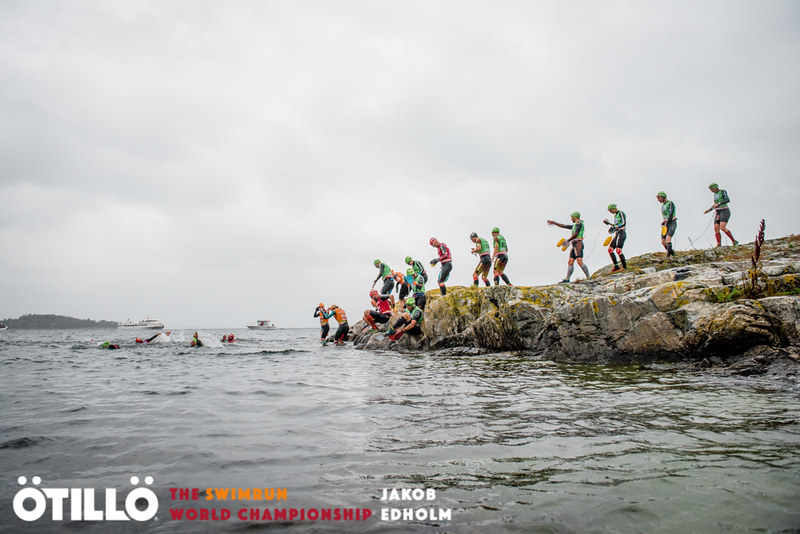 Throughout the day we checked in with all our key staff. Was everything okay? We constantly got the thumbs up to continue. Contingency plans are great to have in the back pocket but so nice not to have to execute. It actually felt really good all day.

Each team, each racer, deserves tons of praise: Finding a space to find flow along the very challenging course. Acting with determination, intelligence and poise. Taking care of each other. Mother Nature exposes all of us if we do not have our pants on and everyone certainly showed that we all did. Thank you!

To have a new record time is mind-boggling. Yes, the swims were certainly faster but the runs … that was some impressive running the leading teams did to push each other so far. In the Mixed class the chase was particularly hard where only 20 seconds separated the winners from the runners-up.

In the women’s category the World Champions proved why they still are the world champions, pushing throughout the race with fantastic teamwork.

Out of the 148 teams that started the race, 118 finished – a whooping 80%, and the world Champions competing all managed to defend their titles, proving yet again why they are on top.

Our thoughts are with Thomas Schreven who was gunning for the win in the mixed category with his wife, Jasmina. An unfortunate fall resulted in a nasty cut across the knee which later became infected and had to be operated on. We wish you a speedy recovery and hope to see you back winning races again soon.

Massive respect to all racers, all volunteers, all staff, all media teams, all boat drivers and to all the hotels and food suppliers for making ÖTILLÖ 2017 another successful year.