Only one world champion left standing

At the race briefing on Sunday evening you could feel the energy in the room. The challenge was: Is this the year when we break the magical 8 hour barrier and/ or will it be the year when we have more than 99 teams across the finish line?

Monday morning was a windy morning, a little warm and actually no humidity at all. Mats and I got up at 3:30 am and got ready for the big day. Our preparations both mental and physical are very similar to when we raced – very focused and feeling the strength of our joint spirits. Mats, as always calls the pilot right away to find out when to start. At 3:45 we had decided, we would do the start at 06:00.

Then off to Seglarhotellet to see if breakfast was chaos or order. This year again it ran beautifully and completely stress-free. Thank you! 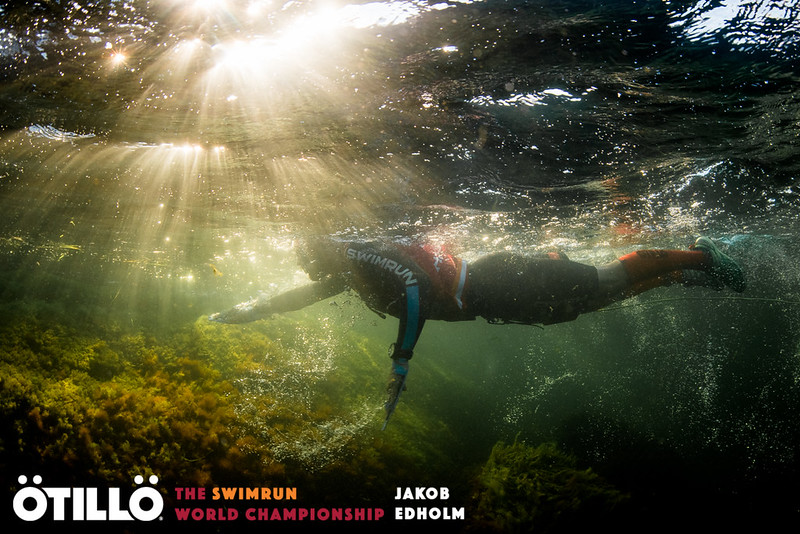 I leave Sandhamn at 05:30 to set up the first swim strobe and watch the start from the other side of the shipping lane. Mats does the start. We hug, wish each other good luck knowing that we do not see each other except for a brief moment at 1 pm until the prize giving. Always the same. Routines and systems is what makes this uber complex race actually work.

Helicopter up in the air and the race is off! Nothing, nothing, nothing and then a burst of color and bodies on to the first beach and the mayhem on the first swim – almost like a huge school of tuna chasing prey.

During the day the race went on beautifully, a good breeze from the North and a good cloud cover gave good conditions for the racers. The front pack was big and they were going very hard. We wondered when and who would have to give in to the pressure and the pace. At the back end of the race the teams were working just as hard, to stay a head of the time barriers and to not get caught out. This is really the beauty fo ÖTILLÖ – every one gives it everything they have to get through the day – no one breezes this course. From the front to the back everyone is emtionally and physically drained at the end!

On Ornö it started to crystalize: Same battle as the past three years between Lelle/ Daniel Team Swedish Armed Forces and Paul Krochak, reigning World Champion, this time with Oscar Olsson team Head Swimming. Lelle and Daniel pulled out all stops on the last islands before Utö and went for the unobtainable – Sub8.

In the mixed category we knew that Eva Nyström and Adriel Young would give Staffan and Marika a run for the title. But how would they do with Eva having given birth just 3 1/2 months earlier? It seems in hind-sight that Staffan and Marika got off to a hard start and not really getting in their usual power groove at the same time as Eva and Adriel were blitzing the course in the lead.

In the womens category Annika and Maja – last years winning team had split up. Annika now racing with Kristin Larsson who had basically won everything she entered during the season and Maja together with Bibben, former double ÖTILLÖ Swimrun World Champion. Throw Ulrika Ericsson and Helena Sivertsson in this mix and we knew that the womens category would be a hornets nest as well.

In the end, not only did we get a wooping sub8 win by Lelle Moberg and Daniel Hansson (7:59), we got all top 3 Men in under the previous course record!

In the mixed category Eva Nyström did the biggest performance I have ever seen, winning with Adriel Young just 3 1/ 2 months after giving birth. They were both so shot on the finish line that they thought that they had an island left.. They also crushed the earlier Mixed team course record and finished 8th overall in this huge race.

Swimrun is carrying the torch, bringing gender eqaulity to the table like no other sport. Thank you all for letting us be part of that.

Last but not least, 110 teams out of 119 finished. This in itself is fantastic! Is the course too easy?
No, the teams are much better prepared and most return racers improved their times yet saw that the competition is getting fiercer.

Two huge barriers have been kicked in, what does the future have in store?

Thank you all for being part of the ÖTILLÖ Swimrun family, what you all do is extraordinary. We should all be proud of what we are bringing to the world of sport; Racers, staff, volunteers, boat drivers, Utö värdshus, media and our sponsors. A big, special thanks to Head, Addnature/Campz and Garmin for believing in our vision and for investing in our sport!