What a great end to a very special year. Our first ÖTILLÖ Malta became everything we could imagine and more.

We started the week with one of our key staff, Håkan, not being able to travel for personal reasons. We, in the core organizing team would have to take on new tasks to cover up for him.

We had more registered racers than any other race over the year and we had a big feeling of responsibility to deliver an awesome experience for everyone.

Always when you start a new destination event you do not know how it will go until after. It is always a learning experience to work with a new team of locals who help us with so much. Luckily John Shaw and his team pulled out all the stops to deliver on their part.

During the week leading up to the race we had all the weather possible. Rain, wind and sun. Friday turned out to be a fantastic day welcoming most racers to Malta with warm sun and bright smiles. Saturday – Sprint and Experience day – equally so. A bit of growing wind from the South West but a beautiful day. The area around Golden Sands is the ideal arena for an interesting Swimrun course with bays, vertical, great trails, amazing views and clear water. This is probably one of our best Sprint courses.

To finish in the sun in the beach was a treat. Close to 250 persons participated and enjoyed the day. It is so good to see the smiles and joy of everyone crossing the line. Young, old, men, women, children, experienced and beginners. Thank you for sharing your passion.

In the afternoon we had a record number of people out for the #cleantheocean activity. Thank You!! As a side note, in the Sprint we had a swim which finished in a bay where currents pushed floating plastic into a big mess – this made the plastic problem extremely apparent to those participating.

For the World Series briefing we were maxed out with close to 400 people. Next year it will be in the Ballroom instead. You could feel the tension as we knew there was a big storm coming and the racers and we were a bit anxious.

Start in the centre of Valletta. At the Triton fountain. In the pouring rain. Amazing the energy among the teams in such miserable conditions. I bet they really enjoyed getting in to the first swim and to feel the warm water.

On time start, full-on gallop through the old town of Valletta. A first swim across the Harbour to Sliema ( which normally is strictly forbidden) before heading out of town towards nature. Going from harder surfaces to softer, much softer… as the rain had turned some of the runs to real mud baths with very slick clay. Teams had to show their skating prowess.

Several big swims. A cut-off that took out more teams than expected due to the slow running through the mud. A miscalculation of resources from us resulted in many teams having to wait under the rain for the cut-off bus to return a second time. Hopefully that will not happen again.

The front teams flew along the course. They were allowed to do all the swims except the one cancelled already the day before. I think they realized why when seeing the size and force of the waves. They got to experience some of the power in the water when doing the Popeye village swim, and that was protected by a concrete pier that took the majority of the power out of the water. It looked wild though.

Towards the later teams the wind and waves continued to build and we had to take out some more swims. Some had over two meter braking waves. We also had to close the Popeye village swim. It is always hard to make decisions like that but they must be made. Some of the teams that did it before we closed them had some big swim experiences. This resulted in tired teams having to do a big run before the last swim.

It looked wild and spectacular. Big surf coming in to a big sandy beach. The entry needed to be well-timed to use the power of the water to get out. John Shaw spent the better part of the afternoon telling everyone how to get in and then swim out. The swim in to the beach was new to many. Big surf waves which are always better at angle than at 90 degrees. Many ended up in the washing machine. Some body surfed along the face of a wave for more or less the whole swim overtaking more than ten teams without any effort. The only way to be good at this is to practice. Some teams were a bit shook up but all very happy to finish this intense race.

Our plan to enjoy the beach and the sun after the race obviously fell through with the majority of teams hanging out in the hotel after. 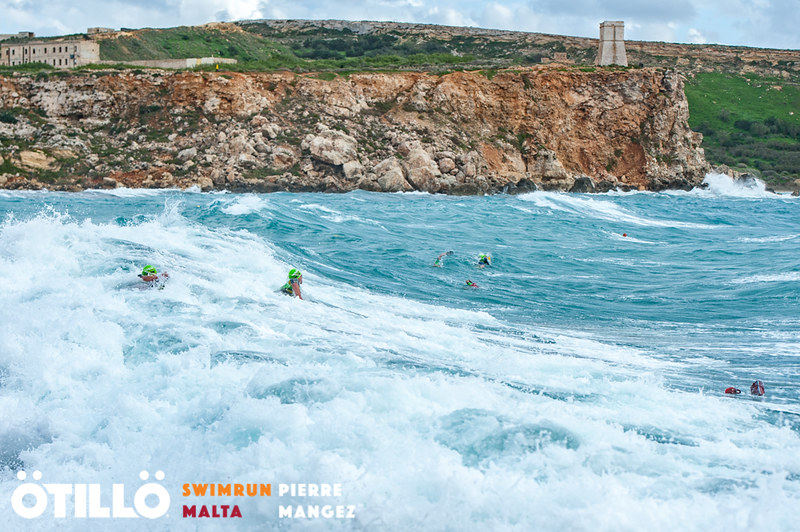 It was once again very exiting at the front with three to six teams pushing hard and once again this year a French team manages to come ahead of everyone. Remi Mariette (19 years old) showed in Cannes that he is a name for the future as he and fellow 19 year old led the race for a long part. Now with the experienced Guillaume Henneman they won just minutes ahead of the World Series Winners, Axegård/ Flores who tied second place after more than 4h30m of racing with Wahlberg/ De Lanuza Gimeno. In the mixed Anna Hellström continues to show her power and winning together with young gun Viktor Dahl this time. In women it was great to see that Helena Sivertsson is really back from injury after taking the win in Cannes and now following it up with new team mate Hanna Skårbratt.

To sum up the season in a few words. It has been a great year. We have been very lucky with the weather having nice days on the Saturday and for the most part having tough weather on the Sunday. Isles of Scilly and 1000 Lakes being the big exceptions as we had amazing Sunday’s there too. But, the big thing is what happened after the weekends with major storms hammering down. We are constantly reminded that nature is so much bigger than us and that all we can do is support each other and adapt.

Thank you all for a great year. We are nothing without you. Please come and celebrate our 15th year of Swimrun together with us in 2020.

Next stop: ÖTILLÖ Catalina, our launch in America

The ÖTILLÖ team through Michael Lemmel