With nature we can never take anything for granted!

When we arrived in Cannes in the beginning of last week we were a bit concerned about the weather forecast; a big, unusual rainstorm was expected for the race weekend. This became the least of our problems.

The same morning as we arrived a torrential downpour with 7 mm of rain in 5 minutes created too much pressure on the sewer system. A big sewer pipe broke in the west end of the bay, close to Mandelieu, resulting in a large amount of grey water running out in the ocean. The authorities closed all the beaches and our swims to the west of our planned course. The closure was effective until Friday night when new decisions were to be made depending on the water quality. This made us start thinking of many different scenarios to be able to put on a race if more water sections would be closed.

On Friday evening all the swims we had on the west side of the Palm Beach peninsula were closed except for the last, short one to the finish line. Not because of the sewer water but because of the heavy rains during the week that had pushed so much stuff into the ocean. We had to make a new Sprint and Experience course for the Saturday, taking into account these closures along with heavy rain and thunderstorm warnings.

Saturday morning we had a new meeting at 8 am until 09:45 with all the authorities on how to manage the courses we had decided upon. The City hall, the Mayors Office and the Police were extremely helpful and we managed to get a race course secured. For the Sunday World Series race we would get the latest water analysis just after 18:00, during the race briefing. Exciting times!

The biggest rain of Saturday came during the Sprint and Experience race briefing with massive amounts of water coming out of the sky. It was by far the biggest amount of participants on a Saturday until date and we had promised ourselves that no matter the weather we would put on a great race for all of them.

The sun broke out as we started the race and more than 340 persons set off in a beautiful rainbow of colours. Big, small, young, old, fast and those not so fast. What a great atmosphere! The two distances, Experience and Sprint, set off on a first loop around the peninsula with a big street completely closed off by the police. The Experience group did one more of the same loop and the Sprint teams set off towards the abandoned train track, straight uphill into the “Californie” area before coming down the “jungle trail” adding a sense of adventure, real OCR and scrambling through a river before being spat out into the sea again for some swims back to the finish.

It is so great to see all the positive energy in the Saturday races where teams, solo racers, Sprint and Experience participants all run around with big smiles and encourage each other all the way. This was the first Experience race with so many children participating with a parent. All of them showing why they are the future of our sport tackling the challenges in front of them with poise and determination.

We also had the honour of welcoming Elise Marc, World Champion in Para triathlon in the Sprint event. Together with her teammate they proved that together they could handle all the obstacles put in the way. Just to get down the jungle trail is a feat in its own.

A huge “thank you” and congratulations to all that participated and made the Sprint and Experience races so very special.

After about 15 minutes of the race briefing on Saturday evening, for Sundays World Series race one of the City officials came to the side opening of the tent. He drew his thumb across his throat; meaning that the water analysis results had come back bad again and that we would not be able to do the World Series course as planned. So, in the middle of the race briefing we announced and explained the new course. Two loops around the islands before swimming across to the mainland and then doing the Sprint loop. All in all the entire course was shortened by almost 4 km. Some racers had suggestions for us to add more swims. In the end I think they did not mind. We had another issue too, a brewing storm from the East. The good part of this was that all water contaminated by the heavy rains would be pushed away from the part of the water we were on. The bad part was that we would have some challenging swims and also a likely 50 – 100 kite surfers wanting to launch and kite in the middle of our course. The kiters the City officials solved very quickly by forbidding water entry and water use during all of the Sunday, posting Police at the launch sites all day.

A beautiful and windy ferry ride to Ile Sainte Marguerite. You could feel the nerves and the anticipation of the racers on the ferry. You could almost cut the adrenaline with a knife. On-time start. Full speed to the first swim towards St Honorat, the Monastery Island. A 700-meter swim – Whoops! What happened here? All the racers, top racers too, were swept to the west by the current, the waves and the wind. They had all underestimated the power of the water. All with big, ominous clouds hanging close. On the return the racers had learned, they swam better. A young, French team in the lead, pushing hard! Team Ark Swimrun and a few other seasoned racers on their heels. A big day was brewing. On the second lap of both islands the top teams in all categories pushed hard, the back of the field fighting to stay in the race. All affected by the power in the water and the effort they had to make to stay on course.

At the same time the locals started giving us information that the swims on the mainland would be impossible in the building seas, that the crossing to the mainland would be too risky and that we should do a third lap of the islands instead and decide the race there. Thankfully, Mats and I were on opposite sides of the big swim. Mats on the mainland and I at the entry. Mats went and looked at all the entries and exits on the mainland. We discussed the different options and we used our experience of 15 years of Swimrun race production to make the decision to continue across as planned. We felt confident that the majority of our racers would manage the swims, the entries and the exits. Without Mats’ clarity this decision had not been made, as the input was too dark at the beginning. This made our day. I stood at the entry and told every team how to navigate the big swim, to keep swimming at an angle to the wind, waves and current so that all would make it to the exit and not be pushed into the big bay of Cannes. The majority of the teams managed and swam safely across. From there they got into a different kind of a race, with a small bit of city, up the steep, abandoned train track, the jungle trail and then a couple of big swims with the current and waves towards the finish. More than 2/3 of the starting teams finished. The top teams said that the swims easily compared with the epic 2017 ÖTILLÖ WC storm. Everyone should be extremely proud over how they raced. 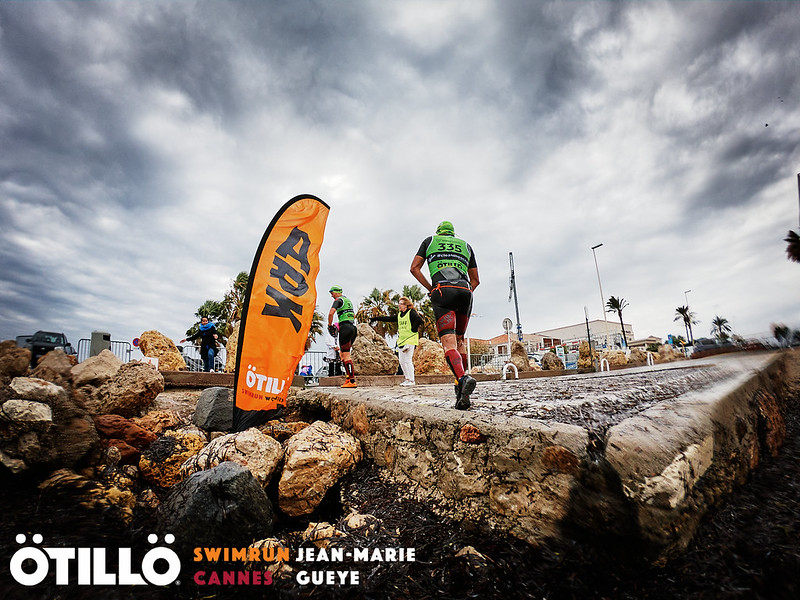 In hindsight we have to say we had a fantastic weekend of races. Nothing was as expected but everything finished extremely well. ÖTILLÖ Cannes 2019 has been our biggest race weekend this year with almost 640 racers and it will go down as the muddiest of all. Hopefully next year we can come back for more sun and less mud!

We are extremely proud of our team that manages to adjust, create new courses and execute with such short notice, always smiling and working for each other.

We thank the City of Cannes for their trust and for their support.

Thank you for sharing our passion with us.